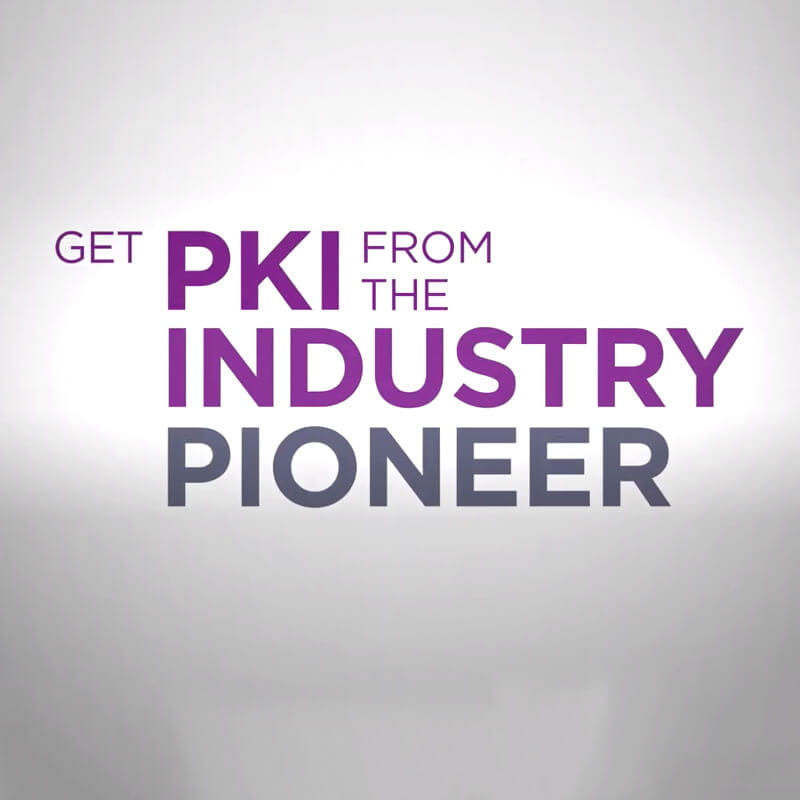 Why is PKI important?

Use cases for PKI

What are certificate repositories and distribution?

What is certificate revocation?

What is client-side software?

What is a public-key infrastructure (PKI)?

As the word “infrastructure” in public key infrastructure implies, PKI is the underlying framework for the technology as a whole; it is not a single, physical entity. PKI encapsulates various “pieces” that make up the technology, including the hardware, software, people, policies, and procedures needed to create, manage, store, distribute, and revoke digital certificates. An important piece of the PKI technology is the CA, which is the certification authority. The CA is the entity that issues digital certificates.

What are the components that make up an effective public key infrastructure?

There are a number of requirements that businesses have with respect to implementing effective public key infrastructures. First and foremost, if users cannot take advantage of encryption and digital signatures in applications, a PKI is not valuable. Consequently, the most important constraint on a PKI is transparency. The term transparency means that users do not have to understand how the PKI manages keys and certificates to take advantage of encryption and digital signature services. An effective PKI is transparent. In addition to user transparency, a business must implement the following items in a PKI to provide the required key and certificate management services: 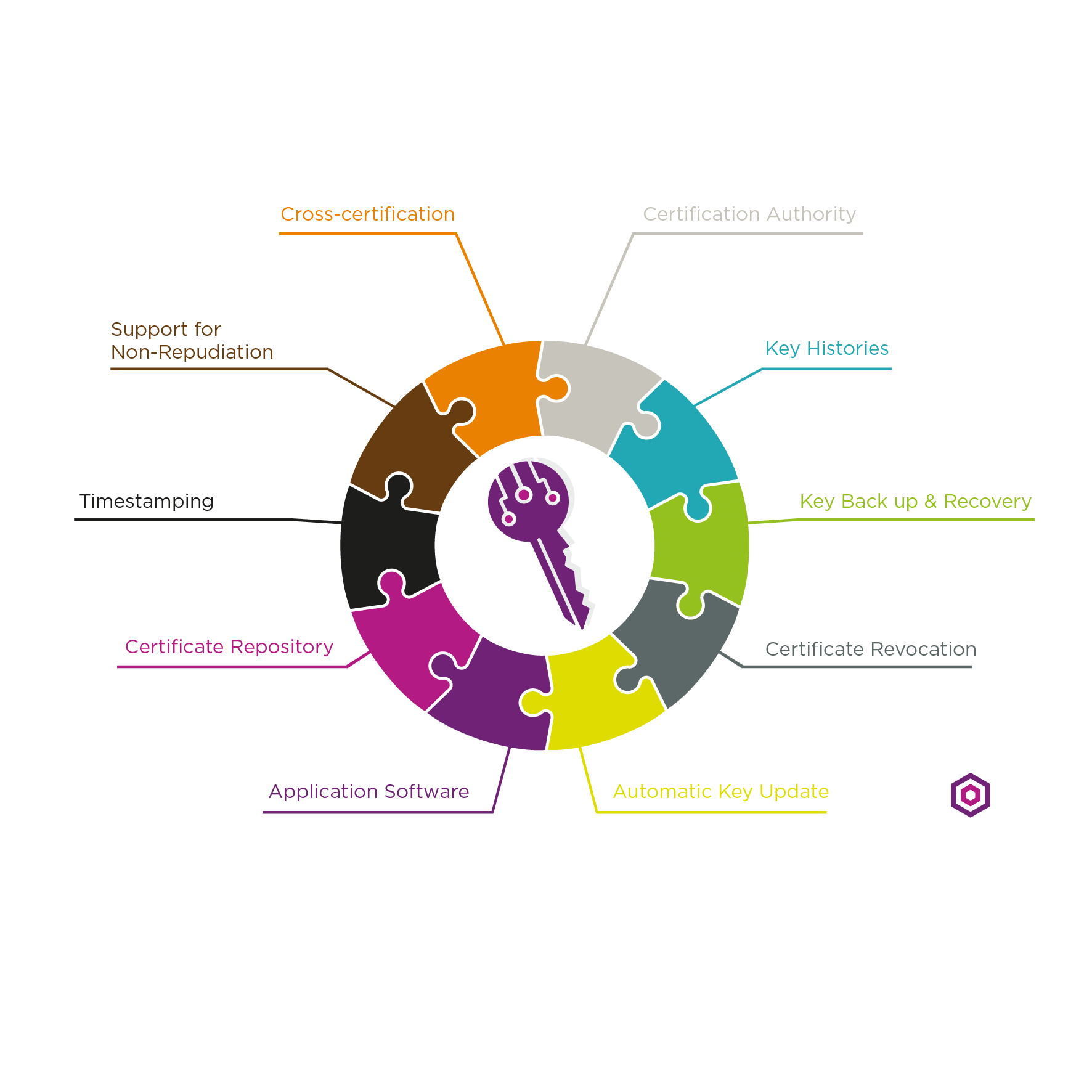 All of these requirements must also be met to have an automatic, transparent, usable PKI.

What are the roles of certificates and certification authorities?

For public key cryptography to be valuable, users must be assured that the other parties with whom they communicate are “safe” – that is, their identities and keys are valid and trustworthy. To provide this assurance, all users of a PKI must have a registered identity.

These identities are stored in a standard X.509 digital public key certificate format. Certification authorities (CAs) represent the people, processes, and tools to create digital certificates that securely bind the names of users to their public keys. In creating certificates, CAs act as agents of trust in a PKI. As long as users trust a CA and its business policies for issuing and managing certificates, they can trust certificates issued by the CA. This is known as third-party trust.

CAs create certificates for users by digitally signing a set of data that includes the following information (and additional items):

Why is PKI important?

PKI is a critical part of the IT strategic backbone. PKI is important because the certificate-based technology helps organizations establish trusted signature, encryption, and identity between people, systems, and things.

With evolving business models becoming more dependent on electronic transactions and digital documents, and with more Internet-aware devices connected to corporate networks, the role of a public key infrastructure is no longer limited to isolated systems such as secure email, smart cards for physical access or encrypted web traffic. PKIs today are expected to support larger numbers of applications, users and devices across complex ecosystems. And with stricter government and industry data security regulations, mainstream operating systems and business applications are becoming more reliant than ever on an organizational PKI to guarantee trust.

What is certification authority or root private key theft?

The theft of certification authority (CA) or root private keys enables an attacker to take over an organization’s public key infrastructure (PKI) and issue bogus certificates, as was done in the Stuxnet attack. Any such compromise may force revocation and reissuance of some or all of the previously issued certificates. A root compromise, such as a stolen root private key, destroys the trust of your PKI and can easily drive you to reestablish a new root and subsidiary issuing CA infrastructure. This can be very expensive in addition to damaging to an enterprise’s corporate identity.

The integrity of an organization’s private keys, throughout the infrastructure from root to issuing CAs, provides the core trust foundation of its PKI and, as such, must be safeguarded. The recognized best practice for securing these critical keys is to use a FIPS 140-2 Level 3 certified hardware security module (HSM), a tamper-resistant device that meets the highest security and assurance standards.

What’s the difference between PKI and SSL?

PKI and SSL, while different, are both certificate-based solutions that establish “trust” with certificates issued by a certificate authority (CA) – whether it’s public trust (SSL) or private trust (PKI).

PKI is an entire framework that consists of hardware, software, policies, and more. A PKI also includes a CA, which is what issues the digital certificates to establish trust. Typically that CA is governed internally according to policies and procedures that align with the security and assurance levels required of the organization.

SSL is one of the top use cases of PKI. It also involves a CA that issues certificates, but it must be recognized by browsers as a publicly trusted CA. And while there are many use cases for PKI , the purpose of SSL is to secure sensitive data transferred via online communications, like online banking or ecommerce transactions.

What are common use cases for PKI?

The primary use cases for PKI can be determined by looking at the applications that most commonly use digital certificates, such as:

Traditional use cases
These business-critical applications make it clear that PKI is a strategic part of the core IT backbone.

New and emerging use cases
There has also been a resurgence of PKI from DevOps-related use cases that are driving increased adoption, such as: 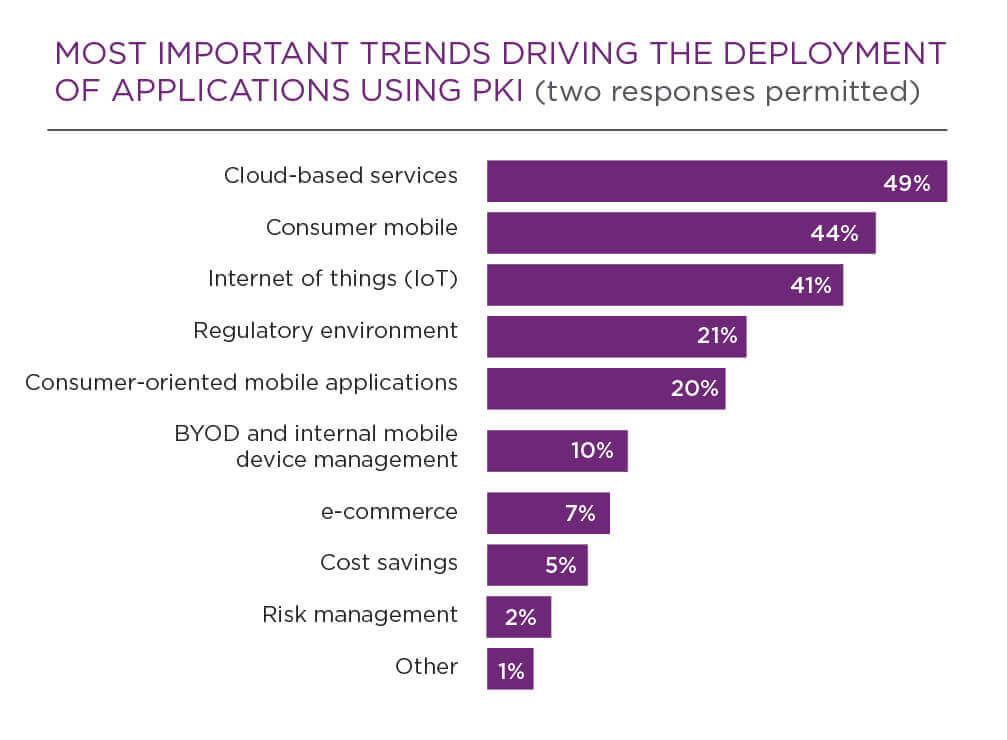 And some experts are predicting future use cases as technology and artificial intelligence gets even more advanced.

What’s the difference between private keys and public keys?

The difference between private and public keys is one is used to encrypt, while the other is used to decrypt.

A public key is used to encrypt information, essentially making it unreadable to anyone who is not the intended recipient. Then that recipient holds a private key with which they are then able to decrypt the information.

Also, a public key is publicly available to a set of users who would need to confidentially send information confidentially. For example, someone’s public key would be available to their colleagues within an organization via a shared directory. Conversely a private key is accessible only by the person receiving the information, and therefore would be the only person able to successfully decrypt what was encrypted.

Together, public and private keys ensure information, data, and communications are encrypted before it is then safely transmitted and decrypted by the appropriate party.

What is key backup and recovery?

A business must be able to retrieve encrypted data when users lose their decryption keys. This means that the enterprise to which the user belongs requires a system for backing up and recovering the decryption keys.

There are two reasons why key backup and recovery are so important to businesses:

What is non-repudiation and how does PKI support it?

Repudiation occurs when an individual denies involvement in a transaction. For example, when someone claims a credit card is stolen, he or she is repudiating liability for transactions that occur with that card any time after reporting the theft.

The signing private key
The most basic requirement for non-repudiation is that the key used to create digital signatures – the signing key – be generated and securely stored in a manner under the sole control of the user at all times. It is not acceptable to back up the signing key. Unlike encryption key pairs, there is no technical or business requirement to back up or restore previous signing key pairs when users forget their passwords or lose, break, or corrupt their signing keys. In such cases, it’s acceptable for users to generate new signing key pairs and continue using them from that time forward.

To meet these requirements, a PKI must support two key pairs for each user. At any point in time, a user must have one current key pair for encryption and decryption, and a second key pair for digital signature and signature verification. Over time, users will have numerous key pairs that must be managed appropriately.

What are key update and management of key histories?

Cryptographic key pairs should not be used forever – they must be updated over time. As a result, every organization needs to consider two important issues:

The key history must also be securely managed by the key backup and recovery system. This allows encrypted data to be recovered securely, regardless of what encryption public key was used to originally encrypt the data (and, by extension, regardless of when the data was encrypted).

The term “repository” refers to a network service that allows for distribution of certificates. Over the past few years, the consensus in the IT industry is that the best technology for certificate repositories is provided by directory systems that are LDAP (Lightweight Directory Access Protocol)-compliant. LDAP defines the standard protocol to access directory systems.

What is certificate revocation?

What is client-side software?

When discussing requirements for PKIs, businesses often neglect the requirement for client-side software. (For instance, many people only focus on the CA component when discussing PKIs). Ultimately, however, the value of a PKI is tied to the ability of users to use encryption and digital signatures. For this reason, the PKI must include client-side software that operates consistently and transparently across applications on the desktop (email, web browsing, e-forms, file/folder encryption, etc.).

What are common PKI management mistakes/challenges?

For proper visibility into the certificates in your infrastructure, it helps to not only centralize PKI management within a specific department, but also with a software tool that provides a single pane of glass for certificate monitoring and reporting.

What security certifications and standards are important for PKI?

There are several different standards and regulations, especially at a regional and/or government level, but the top two more important security certifications when deploying PKI are:

A comprehensive PKI solution must implement the following items:

Only a comprehensive PKI can achieve the goal of establishing and maintaining a trustworthy networking environment, while at the same time providing an automatic and transparent system that is usable.