WHAT IS CODE SIGNING?

Code signing is the process of digitally signing executable files and scripts using a signing tool and a digital certificate. This process is based on a technology called public key infrastructure (PKI).

Signing code requires a dedicated signing tool such as Microsoft’s SignTool, Java’s Jarsigner, or even OpenSSL depending on the type of file to sign. The signature itself is a cryptographic operation that binds the content of the file to a digital certificate.

Code signing protects your company, partners, and end-users from software tampering when downloading executable program files — especially those from unsecured channels like the internet. As a code signing solutions provider, Entrust can help you implement efficient, high assurance code signing solutions that protect your business and your customers from attacks that forge or modify applications.

What is the Purpose of Digitally Signing Code?

There are two main reasons for digitally signing code:

What are Code Signing Certificates?

Code signing certificates are used by software developers to digitally sign applications, drivers, executables, and software programs. This verifies for end-users that the code has not been compromised or hacked by a third party. In order to bind public keys with their associated user (owner of the private key), public key infrastructures (PKIs) use digital certificates.

How Does Code Signing Work?

Learn more about implementing code signing in this white paper.

Various application platforms support code signing and provide different tools to perform the signing. Below is a list of the more common code signing types:

There are five simple steps users should take to determine whether software can be trusted:

Entrust code signing solutions are backed by our extensive expertise in code signing best practices and standards of due care.

How does code signing provide the identity of the organization publishing the signed file?

A digital signature creates a cryptographic bond between a file and a digital certificate, the latter representing an organization. You can think of the certificate as a digitized rubber stamp; it contains details about the organization such as its legal name, email address, physical address, and country. Signing code therefore corresponds to applying a digital stamp to the code, which will display the organization’s details.

The details of a code signature can be checked each time the signed file is opened. In most cases, this is done automatically by operating systems, showing you the name of the organization contained in the certificate used for the signature. 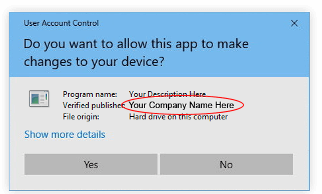 How does code signing provide a means to verify the integrity of the file?

Every code signature is created based on the content of the file. Without going into too much technical detail, a signing tool will calculate a condensed version of the file to sign – we call it a hash – and will sign this condensed version using the digital certificate provided. This signed hash is then embedded into the file in a place dedicated to hosting digital signatures.

Once you start distributing the signed file, operating systems and relevant applications will detect the presence of the signature. They will automatically calculate the hash of the file (without including the signed hash in the calculation) and compare it to the signed hash embedded in the file. If they are both the same, the verification passes. If the calculated hash is different than the signed hash, it fails. A failed verification means the content of the file has been modified after the signature was performed (as a result of an error or a malicious intent).

The reliability of this mechanism is based on the strength of the algorithm used to calculate the hash – the longer the hash, the better. One of the current standards used is SHA-256, an algorithm that produces 256-bit hashes.

What are the benefits of code signing?

There are several benefits of digitally signing code: 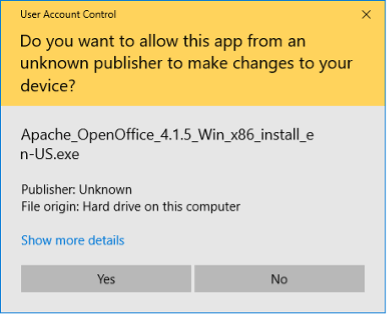 A warning message for unsigned software installation on Microsoft Windows 10. 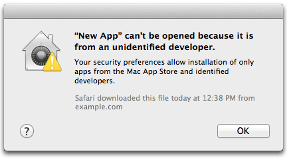 A blocking message for unsigned software installation on MacOS.

For IoT devices using firmware, one of the best ways to ensure safe updates is to build your firmware with a requirement to only accept updated files that are signed using your internal (private) code signing certificates.

Read the white paper: The Importance of Code Signing

While this is perfect for many use cases involving internal applications and IoT, using a private CA doesn’t work when you plan to distribute your code outside of your environment, where your CA is not recognized.

Code signing certificates issued by publicly trusted CAs, such as Entrust’s, will generate signatures that will be recognized and trusted by all major operating systems and applications globally. Public CA organizations (also simply called public CAs) such as Entrust follow strict certificate issuance standards, must go through regular audits, and must apply to become trusted by each major operating system or application provider such as Microsoft, Apple, Google, or Mozilla.

When faced with signed code, operating systems and applications check the issuing CA of the certificate used for the signature. If the issuing CA is not in their “trust list” (also called root store), the signature won’t be trusted and the verification will fail. Hence the importance of getting publicly trusted code signing certificates when publishing software to the internet.

While organizations are free to include any details they want in their private code signing certificates, public certificates must only contain information that has been thoroughly verified by the public CA before issuing the certificate.

A public CA can issue two categories of publicly trusted code signing certificates: OV and EV. These categories correspond to the level of verification of your organization that is performed by the public CA before issuing the certificate, and also the storage requirement for the certificate (specifically, for its private key).

Entrust can supply USB tokens or nShield HSMs for all code signing orders, whether they are OV or EV certificates.

How does timestamping work with a code signing certificate?

Timestamping is a crucial yet often forgotten step of code signing. Signatures indeed have an expiration date, which corresponds to the expiration date of the code signing certificate used for the signature. An expired signature will lead to a failed verification when the signed code is launched, which would lead to warning messages and even code being prevented from running.

Private certificates can have a very long lifetime (10+ years) if needed, which is often enough because the signed code might no longer be used after such a long period. But public code signing certificates are currently valid for a maximum of three years, and there’s a very good chance your code will still be available by the end of this period. Timestamping a code signature will give it another 9-10 years of validity (depending on the validity period of the timestamping certificate used). And you can reapply a new timestamp when the current one is about to expire to further extend the validity of your code signature and avoid any warnings/blockings.