The California Consumer Privacy Act (CCPA) went into effect at the beginning of 2020, with July 1, 2020 marking the expiration of the six-month CCPA compliance grace period. The CCPA addresses the use of encryption to protect consumer personal information. Assembly Bill 1130, which is not part of CCPA but was introduced to update the California breach notification statute, requires notifying people whose data has been breached unless that data is encrypted, and the encryption keys have not been obtained with the data.

Following are excerpted parts of California’s CCPA and Data Breach Notification Statute with which Entrust nShield HSMs can help you comply.

Any consumer whose nonencrypted and nonredacted personal information, as defined in subparagraph (A) of paragraph (1) of subdivision (d) of Section 1798.81.5, is subject to an unauthorized access and exfiltration, theft, or disclosure as a result of the business’s violation of the duty to implement and maintain reasonable security procedures and practices appropriate to the nature of the information to protect the personal information may institute a civil action for any of the following:

(A) To recover damages in an amount not less than one hundred dollars ($100) and not greater than seven hundred and fifty ($750) per consumer per incident or actual damages, whichever is greater.

(B) Injunctive or declaratory relief.

(C) Any other relief the court deems proper.

While the CCPA itself does not provide more details about data encryption, an amendment to California’s data breach statute does. Late in 2019, simultaneous to signing amendments to CCPA, California’s legislators also signed Assembly Bill 1130, which specifically refers to encryption and the protection of encryption keys. The following is excerpted from the Bill:

The amendment above indicates organizations cannot just encrypt California residents’ data to protect it, they must also safeguard the associated encryption keys or security credentials to be in compliance. Encryption protects sensitive information, including financial data, government IDs and Social Security numbers, by making it unreadable, but if you fail to protect the encryption keys it’s like locking your front door and leaving the keys under the mat.

Best practice for cryptographic key security is to store those keys in a hardware security module (HSM). Entrust nShield® HSMs are hardened, tamper-resistant hardware devices that secure cryptographic processes by generating, protecting, and managing keys used for encrypting and decrypting data and creating digital signatures and certificates. nShield HSMs are tested, validated and certified to the highest security standards including FIPS 140-2 and Common Criteria. nShield HSMs enable organizations to:

nShield as a Service is a subscription-based solution for generating, accessing and protecting cryptographic key material, separately from sensitive data, using dedicated FIPS 140-2 Level 3 certified nShield Connect HSMs. The solution delivers the same features and functionality as on-premise HSMs combined with the benefits of a cloud service deployment. This allows customers to fulfill their cloud first objectives and leave the maintenance of these appliances to the experts at Entrust. 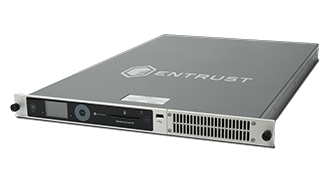